Old Oak is the seat of House Oakheart, an ancient house that traces its ancestry to Garth Greenhand, one of the founders of many noble houses in The Reach. Their sigil is three green oak leaves on gold. The main town of House Oakheart is called Branche and is an important economic center on the Ocean Road from the Reach to Lannisport. The surrounding lands including small villages, such as Sevenoaks, Buckler's Bay, Ciderwell, Lightleaf, and Morton. House Oakheart has an esteemed history of knights that have served in the Kingsguard, including Ser Arys and Ser Olyvar, but is more notorious for fighting the Dornish in major battles of the age-old rivalry. Their great hall and galleries are filled with tapestries, paintings, and murals depicting these historic scenes and also relics from their conquests in Dorne. The most famous of these knights are called the Three Leaves, who fought in the Prince's Pass with Daeron I Targaryen.

Note: Dosk and Little Dosk have been assigned to the lands of House Oakheart, Dosk has not been built and will need to be constructed as part of any future update or redo.

Old Oak was constructed in June 2014 to September 2014 by tsarkaiser84 and MrHambone. It was one of the earlier builds in the new release of the South and worked closely with it's neighboring builds, such as Coldmoat, Standfast, Lowther, and Westbrook. The castle was completed first with the town of Branche and the following lands being completed later. The surrounding hamlets and a septry were made by other builders as sub-applications. House Lowther and House Westbrook, although separate projects were closely tied with Old Oak because they are likely vassal houses to House Oakheart.

Although there is much information about the historic members of House Oakheart, very little is known about their castle and its design. The builders emphasized the martial aspect of the family and their pride and chivalry. The castle and townhouses are representative of the northwest Reach.

The Old Oak built by Tsarkaiser replaced an older build by Hennhouse from Fall 2012, which used sandstone accents and was shaped like a large oak stump. 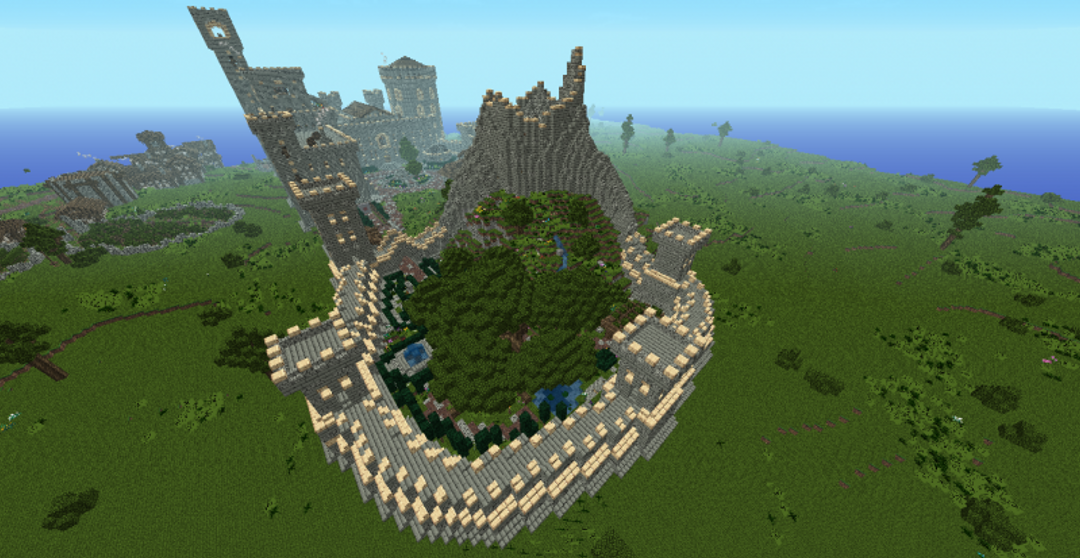 Old Oak and the town of Branche were feature in Episode 34 of WesterosCraft Walks. DutchGuard begins in the town before exploring the castle, its galleries and halls, and also the crypts beneath and some of the towers.