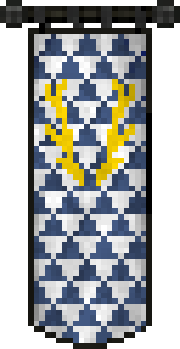 Antlers, also called "the Antlers," is a keep in The Crownlands and the seat of House Buckwell. The house fought for the Targaryens during Robert’s Rebellion, which may explain why the only known member, Jarmen Buckwell, is now a senior ranger in the Night's Watch, either choosing the black or being cast out by "the Usurper." According to semi-canon sources, they blazon their arms with a rack of golden antlers on vair. Their words are “Pride and Purpose.” The Buckwell lands are northeast of Duskendale and southwest of Maidenpool. House Harte is a minor house sworn directly to House Buckwell. Both houses share similar sigils.

Antlers was constructed in the summer of 2014, after being approved in April 2014. The terrain required extensive terraforming of the Wellswood, which added variety to a rather bland section of the Crownlands. The stone palette uses a nice gradient from darker stone to cobble and stone masonry, but is still in the typical Crownland's style.

starcat98 used Rochester Castle, England for inspiration. This castle uses a square Norman style, which is a hallmark of the Crownlands architecture and palette. Since House Buckwell and House Harte have such similar sigils, the houses were paired together, which Harte being a vassal of Buckwell.

Antlers was featured in Episode 33 of WesterosCraft Walks. DutchGuard begins in Harton and the keep of House Harte and walks past the Wellswood before exploring the keep. BearicRoyce makes a hilarious cameo as "The Bear in the Brewery."